The legendary Frank Frazetta (1928-2010) began drawing for comic books at the age of sixteen, which led to his work with some of the most prominent comic book producers. This work eventually led to creating ads for popular magazines, one of which caught the eye of a successful movie studio. He was then approached to create a movie poster, earning his yearly salary in one afternoon. Several famous movie posters followed, then came his painting for paperback editions of adventure novels.

From this point on, Frazetta's work was highly sought after. Once he had secured a solid reputation, movie studios and recording artists alike were approaching him, to attain custom pieces for their films, album covers, etc. Today, Frazetta's work is so highly regarded that even incomplete sketches of his sell for thousands of dollars. We were fortunate to have the opportunity to team up with the Frazetta estate for this new line of exclusive knives, featuring his incredible artwork!

A large but slender EDC and work knife, which can be carried comfortably even in a tighter pocket, due to the slim profile (handle thickness is less than "). The flat ground drop point blade, made of 440C stainless steel, can manage any cutting task with ease, and the synthetic handle scales are adorned with Frank Frazetta's famous "Ghoul Queen" piece. The polished pocket clip is reversible, enhancing the versatility of this impressive piece. 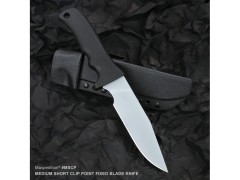 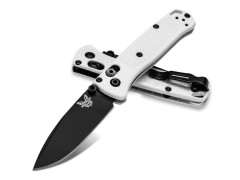